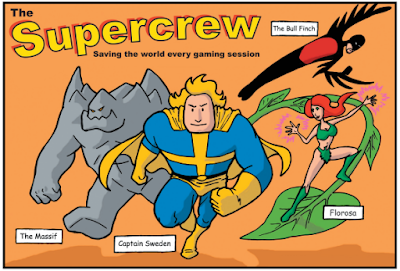 In the Supers genre of games, there is a lot to choose from and to me most of the games out there fall short in either capturing the soul of the genre or in the mechanics. I have ran and played in a lot of different supers games in my time and for awhile I lost my drive for supers games until I stumbled across The Supercrew. This is one of those games that flies under the radar because it is independently published, written, and drawn by Tobias Radsater who lives in Sweden.

Presentation: The entire game is designed and presented as a 30 page comic. As you read through the comic book you are take through a one shot premise, character creation, the system, and all of the how to do x, y, and z's. The one shot premise is highly entertaining because all of the characters start out as going to a Dungeons and Dragons session and during the game they receive notice of impending danger and then proceed to make separate excuses to leave the game. This naturally leaves the game masters head spinning. The art is simple yet it fits the genre and the style really well - it is very four color. 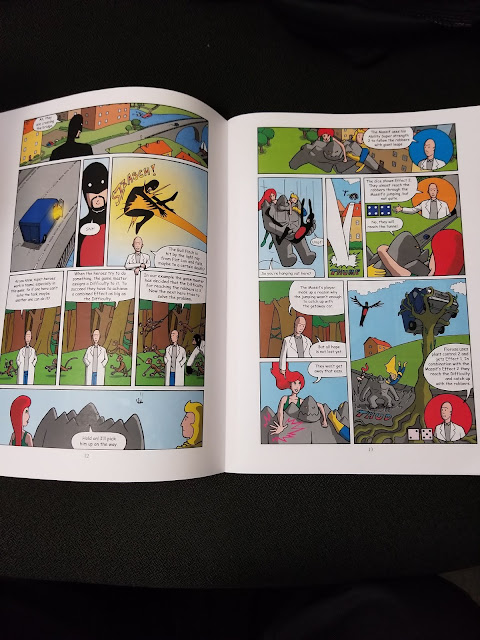 Character Creation: Character creation happens in of two ways per true super hero game fashion. You can roll for your abilities and define them randomly or you can make up whatever abilities you want to design your superhero. You choose or roll for three abilities and decide which one will have a Rank of 3, a Rank of 2, and a Rank of 1. To help focus your decisions, you are given a table that includes (you use it to random roll as well) attribute, super power, attack, equipment, control, and skill. In addition to this, you get to define three tricks that help make your hero more unique and they can be used once per adventure. Each trick is attached to an ability and has a different effect that changes the die roll. Another neat little quark to this game is that the character sheet has space for you to draw your heroes costume and it is part of the process.

Here are some examples of characters: 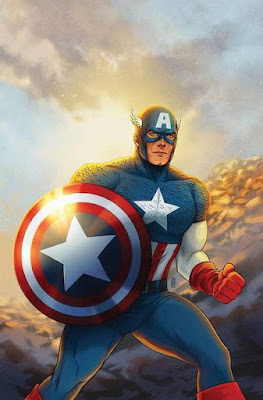 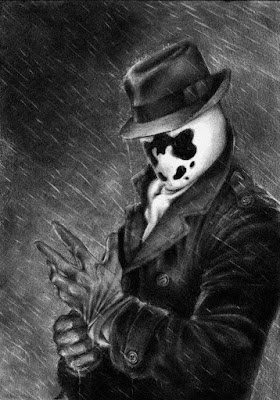 ABILITIES
1:Gas Powered Grappling Gun
2: Street Fighter "The city is afraid of me"
3:Detective "Last night, a comedian died in New York. Somebody knows why. Somebody knows."

TRICKS
Reroll Gas Powered Grappling Gun):  Unexpected Action "Tactically brilliant and unpredictable"
Change roll to '5' (Detective): Gain Information "Give me the smallest finger on a mans hand. I'll produce information."
Effect 2 (Street Fighter):Everything is a Weapon - in the story he uses a toilet bowl, a fork, cooking fat, and a cigarette as weapons.

Resolution: The mechanics are straight forward. For each rank you roll that number of six sided dice and each result of a 4, 5, or 6 counts as a success which is called an effect. 6's explode and are re-rolled to add additional effect. Though, there is a caveat to using your Rank 3 ability and that is it costs an hero point to use. Players earn hero points by using their Rank 1 abilities. This creates an interesting type of meta currency that does not hold over to future sessions. A hero can also get a once per session anecdote bonus when the recall something from a previous story.  Heroes can team up to give the lead hero an extra dice to roll for an task.

Certain challenges of a static nature have an effect rating which acts like a difficulty class and you need to meet or exceed that effect rating. Sometimes these can be extended challenges while other times you have one shot.

Combat runs just as smooth. Everyone chooses an ability and rolls for Effect, each character acting in order of Effect (ties act at the same time). If you are attacked, you can respond with a reflex defense or a powerful defense. A reflex defense only gives you one die, but if you use a powerful defense you lose your attack (and you can't powerful defend if you already attacked this round). Effects are subtracted and the result is applied to Toughness (this game's version of hit points; all heroes have 3, villains can have more). When you get to zero Toughness, you are knocked out (nobody ever dies in Supercrew like usual four color fashion). You can treat obstacles as either simple difficulties to equal with Effect, or as full-blown opponents with Toughness, abilities, and Tricks (the rule book has a great example of the Supercrew "fighting" a building fire).

It is very important to remember that this is a narrative focused game and with that, here is some sage advice:

Crunch: None to speak of.

Final Thoughts: I have had the chance to run this and play in a few times and it is a lot of fun as a one shot and as a campaign. I think Supercrew has two really strong points. The first one being is that players roll their dice first, act in the order of effect, and then describe their actions. The second strong point being is it really forces the players to think creatively because due to the lite mechanics (and per design) abilities are not meant to have single uses. You can do whatever you can come up with when using your abilities and invent new ways to defend, attack, save a kitten, or even talk to the girl at Starbucks. The sky is the limit for your narration. Honestly, if as a GM you need the players to roll the dice in a social situation then decide of the character would be good at it (2 dice) or bad at it (1 dice) taking into consideration their background and the situation itself (alternatively, make dice allocations on role play effort and creativity).

I think this game has so much potential but is not well known or overlooked because it is seen as one shot fodder. This game has gotten me out of my superhero slump and I want to run or play in a supers game again. 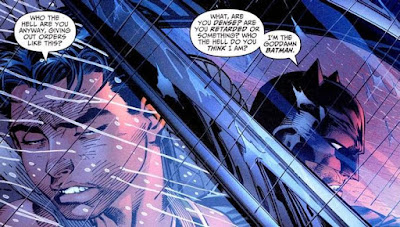 You can find it here;

PDF at LULU
Sadly, the POD is no longer available but I just printed it out at Staples. 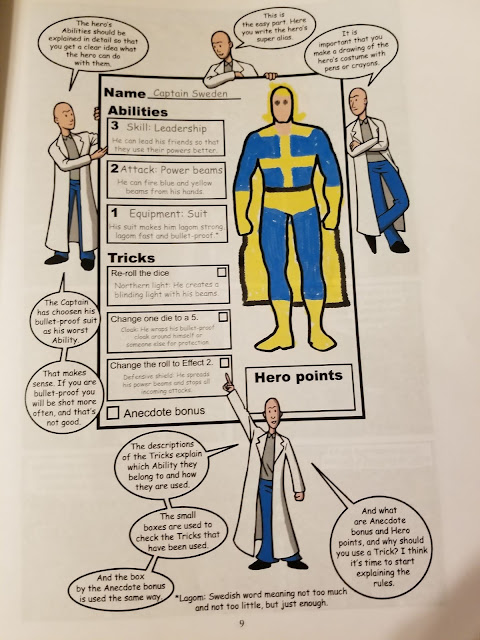 Email ThisBlogThis!Share to TwitterShare to FacebookShare to Pinterest
Labels: Games of Note, Review 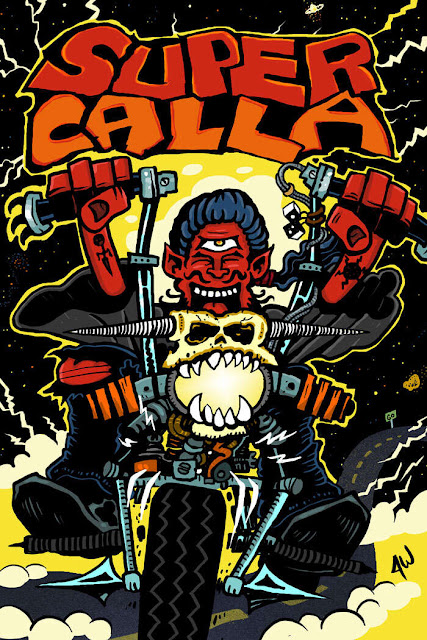