Fear of the Rules that are Lite

It has come to my attention that rules lite games make people weary and it has been frustrating for me. I have had many conversations with people trying to pitch a game like Sword and Backpack, Swords and Six-Siders, Supercrew, Blood of Pangea, or other games on or around that crunch level. The most common response is something along the lines of "I get it, but I am not sure if there is enough there for structure".  I am not sure what type of structure they think is missing; character creation? check,  resolution mechanic? check, and obstacles for them to overcome? check.

So, I have been spending a lot of time thinking about this from different angles and I have come up with three conclusions as why people in general have an aversion when you talk about a game with a 32 page rule book instead of a 300+ rule book. 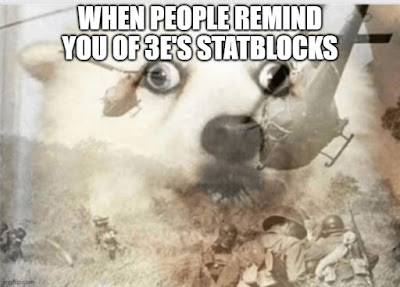 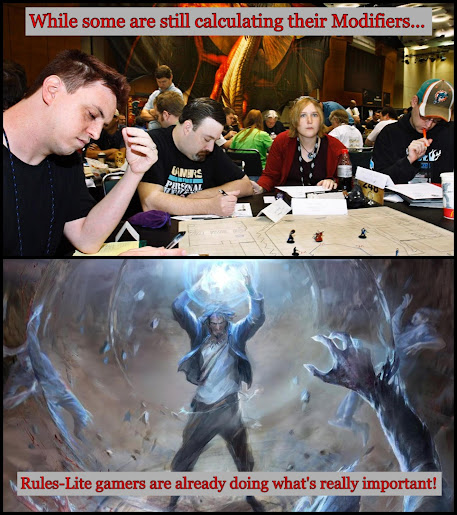 I think that it comes down to the Player's Responsibility and if they want to be entertained then they can go play a bored game. Maybe I am just being an old grognard but I have been around the block more then a few times and I would rather role play then roll play.

I guess I wish more people would just relax, try something new or old, participate, get into character, put input into the world, and let the immersion happen.

You cannot tell me that waiting got for the GM to look up a rule, the players looking up spells or characters abilities, or adding up modifiers before they decide what to do (in and out of combat) helps with the flow of the game or supports immersion.

This has been another episode of What Really Grinds my Gears... 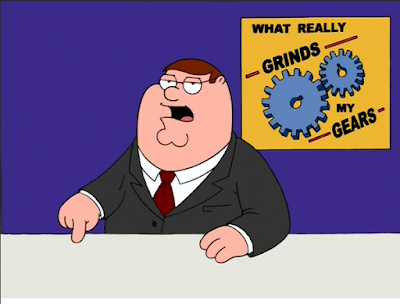 Email ThisBlogThis!Share to TwitterShare to FacebookShare to Pinterest
Labels: OSR, What Really Grinds My Gears